“Nobody expects the healer to die.

For most of the village, it would be a simple matter to wait for spring, making do until a new wolf-woman could travel south.

For Aizen Shouni, that wait could be a death sentence.

Esper and Kaillte Oisinson begin their search for a cure – a search that leads them down paths most would fear to tread.

With winter closing in and Aizen’s health deteriorating, one dangerous spark of inspiration could save the dark-elf and give him a chance at a full life – or spell disaster for everyone involved.

Oisinson is a coming-of-age story that toes the line between viking age historic fantasy and low-magic sword and sorcery, set in a world where gods choose champions and differences are celebrated.

Pick up this short and punchy read, and find out where Esper’s story began.”

Get it on Kindle, Kindle Unlimited, and in Paperback!

Listen to it for free on YouTube and Patreon!

Next in this Series:

The Tales of Esper Ravenwood

“A dead man tells no tales – unless that man is Esper Ravenwood.

He owes the Goddess of Death a debt for his third incarnation as a revenant. That, he expected.

He expected to be sent after the undead necromancer terrorizing a village in the backwaters of County Orthamear.

What he didn’t expect was the team of misfits, mercenaries, and one enterprising pixie that assemble around him when they all realize that their best hope of lifting this curse is a bard, not an exorcist. And none of them want to let a bard do an exorcist’s job on his own.

He may be dead, but the Tales of Esper Ravenwood are just getting started.”

Get it on Kindle, Kindle Unlimited and in Paperback

“Esper Ravenwood is a man driven by curses.

He thought he had his own under control until an attack by the Legion pushes him over the edge when his team needs him at his best.

As if things couldn’t get any worse, his missing memories are coming back.

All three hundred years’ worth of them.

With the Legion mobilizing and a Demon Lord threatening war on Omnia, the Company of Esper Ravenwood has no time to be breaking curses and fighting amongst themselves – meaning they’ll have to adapt to hold any hope of saving anyone.

Their leader may be a dead man walking once again.”

Get it on Kindle, Kindle Unlimited, and in Paperback

“A dead man’s heart is a hard thing to break.

His arm, not so much.

When the Raven Queen calls for aid and Esper answers, both his heart and the sleeve he tends to wear it on go up in flames.

The enemy is gathering strength. The rematch between the Pheonix King and Demon Lord Kaillte is approaching.

And Esper Ravenwood played right into the Archdemon’s plans.

Now, unable to wield a sword, Esper must take up a new weapon against a growing sea of trouble, and rely on his dwindling team more than he has ever relied on anyone.

But perhaps there are older powers at play here than even the Raven Queen.

Get it on Kindle, Kindle Unlimited, and in Paperback

“There are times in life when a person bites off more than they can chew. Rowan Ravenwood is a runepriest and a sell-sword, and in his line of work, the frustrating and unexpected are usually commonplace. However, for all his years of wandering the countryside smiting the undead and pissing off the nobility in Silverkeep, he could never have anticipated what happens when his uncle comes to him with a rather unusual task. In this first volume in the Tales from Liserna, we join Rowan as he takes on a partner who is everything he never bargained for, battles with the mystical and powerful forces of the ancient Runes, and gets himself lost. Twice. Sarcastic banter, flamboyant bards, dark and mysterious forces beyond our control, and the occasional hint of Druidry see this mission to a conclusion that will send Estland spiraling for years to come.”

Get it on Kindle and Kindle Unlimited: Runesong 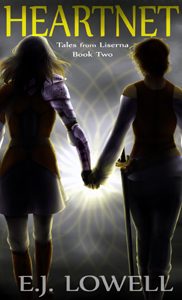 “Sive Ravenwood has many talents. Herbalism, divination, and spellcraft, for instance. She’s also a berserker, and when she starts having visions of losing control and killing her younger brother, she realizes she has to do something before her inner beast takes things too far. When she steps back into Omnia for the first time in over a year, she runs into perhaps the last person she would expect: the irreverent and frankly terrifying Mairin Heartnet. In the midst of learning how to make peace with her own power, Sive finds herself caught between a wolf, a chimera, and a painter in a tangle of mercenary politics and iron-price scheming. With death threats looming on the horizon, Sive and Mairin take matters into their own hands. This, it turns out, might be the last mistake either of them ever make.”

Get it on Kindle and Kindle Unlimited: Heartnet 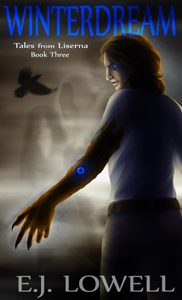 “There’s always one who doesn’t quite fit, and Eirnin is far and away the black sheep of the Ravenwood family. Between the voices in his head and the blood in his veins, he’s never felt truly welcome. All that comes to a head as he falls out of Liserna and into the Red Desert, in the southernmost reaches of Lazarus. It’s in this strange new world that he will strive to create a name for himself, find his place in the workings of the Empire, and overcome years of internalized doubt and uncertainty regarding his own identity. Ride, fly, and raid through the arid mountains and endless rolling sands of Hargaoah with Eirnin, and the band of strange, terrifying, sometimes hilarious misfits that sweep him into their midst, as they strike out on a path to change the realm of Omnia.”

Get it on Kindle and Kindle Unlimited: Winterdream 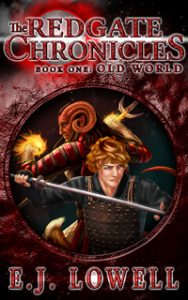 “The world, it seems, will never forget its chaos and be at peace. For more than a thousand years, wars, rebellions, and uprisings have kept the land in turmoil. At the slightest hint of lasting peace, another resurgence begins, and tensions with the Beast-folk races rise once more. Swept into the midst of that strife are three unlikely champions, pulled from the dungeons of Olsan and into the service of an unorthodox queen. With the world breaking down around them, and enemies rising in the shadows, it appears their only hope lies in the cryptic musings of a peculiar bard, and in ancient tales long abandoned. In the end, a desperate attempt at a solution may be their only way out. This is a tale of nobles and monsters, legends and demons, and a familiar face come to tell the story.”

Get it on Kindle and Kindle Unlimited: Old World 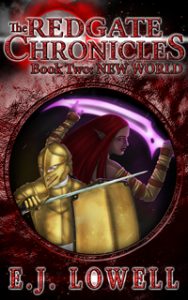 “After making an irrevocable mistake, Marcus finds himself, Evaline, and Kisuke in a world where myth is reality and nobody is quite what they seem – or what the trio remembers. Dragons now rule over what were once Provinces, and the necromancers that defeated them before have been all but eradicated. Torn by forces both within and without, Marcus, Evaline, and Kisuke find old faces in surprising places, fight to repair the damage done, and survive as best they can in a war between powerful Dragon Lords. Their skills and wills will be tested equally, as these outsiders find their places on the stage once again. This is a new world, and the Champions of Redgate certainly aren’t in Laine anymore.”

Get it on Kindle and Kindle Unlimited: New World